Is there a story happening when I play Dubious Alliance? Yes! The Basic Game deck includes the Orc Warchiefs of the Gore Stained Axe tribe and their minions. Each Orc is racing each other to gather weapons, seek magic & treasure, slay monsters and ultimately take control of the tribe to rule over the realm of Hirntodia. Threatening them all is Snarl the Colossal Dragon. Snarl has ruled the realm for too long, and so the surest way to impress the tribe and win will be to challenge Snarl. Along the way, the Orcs will have to over come traps, avoid curses, make a few poor decisions and most importantly negotiate with their fellow Players to win, or survive.

If you have played a Role Playing Game, then imagine that each Card that makes it into your Active Hand is a step in your adventure story. Likely your story will include Cards taken by other Players. Your "Allies" will steal from you, explore locations you have previously commanded and use the same tricks you may have.
How do Player Abilities work? Each Player Card has an Ability to give them a unique edge against certain types of cards or situations. Generally a Player can attempt to use their Ability whenever the condition occurs to that Player. For example, Hulg has the Ability to attempt a Prestige check to Discard any card with the key words Event (because an Orc Zombie can ignore just about everything). Hulg may attempt to use this Ability when he Reveals an Event card or when an Event card is about to enter his Active Hand through other means. So, if Hulg reveals the "Tortured" Event card, the Player can Draw a card for a Prestige check. If successful, the "Tortured" card would be Discarded instead of added to the Active Hand. Torturing a Zombie just doesn't hurt much! 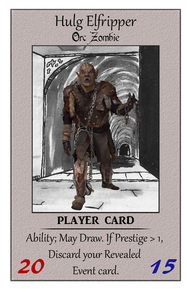 How do I track my Survival and Prestige? Remember that a Player starts with a beginning number of Survival points indicated in red (Hulg Elfripper starts with 20). A Player also has a blue Prestige Goal to win. The Hulg Player will total all red Survival points cards in the Active Hand and add or subtract the total from the beginning 20 Survival points to ensure he is still alive (or walking as the case may be for an Orc Zombie).

Similarly, the Hulg Player will total the blue Prestige value of all cards in his Active Hand to see if he reached the goal of 15 Prestige points to win.

Scores are checked by adding Survival and Prestige cards each round. Experienced Players may want to track their scores using a score pad, displaying their score using 20 sided dice, counting colored beads and more. A downloadable PDF Battle Mat that includes a Survival and Prestige tracking scale will be offered soon
Why do I Draw through so many cards looking for a certain type of card? Some times a Player will Draw and Discard numerous cards in search of a certain type of card. This results in (what may feel like) numerous card being discarded before they ever get played. This is good thing! By cycling through cards and discarding them, each game of Dubious Alliance is different. As a result of cycling through cards, some cards will not 'show up' in an entire game. This ensures that you can replay Dubious Alliance with the same deck and still have a very different adventure. Be patient when you are Drawing and Discarding, you will find the card you need. Remember to reshuffle the Discard deck when you run out of Draw cards.
What happens when I have more than one Location card in my Active Hand? Location Cards represent the various locations you Player Card has explored during the adventure. The most recent Location card added to the Active Hand becomes the Current Location. Some Location Cards grant unique Abilities to the Player. As long as a new Location card is not added to the Active Card, the Current Location remains in affect, including any ongoing Ability. When a new Location card is gained, the previous one is kept in the Active Hand and counts in scoring, but any special Ability is lost. Only the special Ability of the most recently added Location Card may be used. Cards that allow you to take a Location Card (like the "Teleport" card can be used to make a past location your Current Location.
Some cards do not have a red Survival and blue Prestige value, what happens when I Draw one for a Prestige check? Cards without Survival and Prestige values should be counted as having Survival and Prestige values of zero (0) for purposes of Prestige checks and other value dependent cards.
Am I allowed to kill myself or another player to end the game and prevent a winner?
The rules clearly state that players must work together to survive. However it has been our experience that many players are tempted to kill a fellow or or race to the 'suicide solution' in order to prevent a player from winning. The 'nuclear option' is technically feasible within the rules, and some players find that killing a player to prevent a win seems like legitimate orcish behavior. In truth, players have to pass negative cards to each other, and so they are flirting with disaster every trade. Other players find that stopping a win by killing a weaker player detracts from the role playing game feel and is not in keeping with the spirit of working together to survive. Players may want to start each game with an agreement to permit the 'intentional death move' or not.
Return to the Home page
Powered by